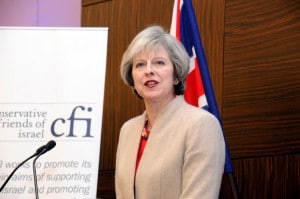 Prime Minister Theresa May has vowed to mark the centenary of the Balfour Declaration with “pride” and spoken of her vision to take the UK-Israel relationship “to the next level” in her keynote speech to CFI’s biggest ever Annual Business Lunch on Monday 12th December.

A record 800 guests, including as many as 200 Conservative parliamentarians, were present to hear Prime Minister Theresa May make her first speech about Israel and issues affecting the UK Jewish community.

The Prime Minister used her much-anticipated speech to outline the UK’s “pride” in “creating a homeland for the Jewish people” with the Balfour Declaration, and made a “ground-breaking” announcement that the UK was adopting the broad definition of anti-Semitism drawn up by the International Holocaust Remembrance Alliance (IHRA) – an intergovernmental organisation backed by 31 countries.

In her wide-ranging speech that received a standing ovation, the PM praised the International Development Secretary’s decision to freeze aid to the PA pending investigation into allegations it pays salaries to convicted terrorists, strongly condemned anti-Semitism within the Labour Party, and restated the Government’s commitment to building a National Holocaust Memorial and Learning Centre.

The audience included a number of Cabinet Ministers, along with elected Conservative representatives from the devolved Scottish, Welsh and London administrations.

“After a year of political tumult, today’s record attendance was proof that there has been a constant – the Conservative Party’s enduring support for the State of Israel and the UK’s Jewish community.

“The Prime Minister’s clear vision of deepening the UK-Israel relationship and her groundbreaking announcement of adopting a new definition for anti-Semitism prove that this is a Government of action, and not just words”.

Prime Minister on the Balfour Declaration:

The Prime Minister said the UK was entering a “special time” – the centenary of the Balfour Declaration, which had been signed by a Conservative Foreign Secretary, Arthur James Balfour.

Mrs May asserted: “It is one of the most important letters in history. It demonstrates Britain’s vital role in creating a homeland for the Jewish people. And it is an anniversary we will be marking with pride”.

In the wake of the EU referendum, the PM said the UK is “forging a new role for itself on the world stage – open, outward-looking, optimistic”.

Mrs May said “Israel will be crucial to us as we do that. Because I believe our two countries have a great deal in common. As the Ambassador Mark Regev said, we have common values; we work together, on health, counter-terrorism, cyber security, technology; and we can help each other achieve our aims”.

The PM said that “Our economic relationship is already strong”, but vowed that she wanted “to take maximum advantage of trade and investment opportunities, because we know enterprise is the key to our countries’ prosperity”.

In a strong rebuttal to the so-called BDS movement, the PM said: “I couldn’t be clearer – the Boycotts, Divestment and Sanctions movement is wrong, it is unacceptable, and this party and this government will have no truck with those who subscribe to it”.

Expressing her hope to “take our trading and investing relationship with Israel to the next level”, Mrs May said it is for this reason that “one of the first places Mark Garnier visited as a Minister in the Department for International Trade was Israel. It’s why other Ministers plan to visit in the New Year”.

Addressing concerns about anti-Semitism in the UK, the Prime Minister asserted that it “has no place in politics and no place in this country”.

“Let me be clear: it is unacceptable that there is anti-Semitism in this country. It is even worse that incidents are reportedly on the rise. And it is disgusting that these twisted views are being found in British politics”.

The Prime Minister announced that the UK is adopting an internationally-backed charity’s formal definition of anti-Semitism in a “ground-breaking step towards eradicating anti-Semitism”.

The PM said that it will “mean there will be one definition of anti-Semitism – in essence, language or behaviour that displays hatred towards Jews because they are Jews – and anyone guilty of that will be called out on it”.

Mrs May paid tribute to the work of Rt. Hon. Sir Eric Pickles MP, CFI’s Parliamentary Chairman and the UK’s Post-Holocaust Issues Envoy, for “working tooth and nail to get that agreed”.

The International Holocaust Remembrance Alliance’s (IHRA), an intergovernmental organisation backed by 31 countries, agreed a definition in May it hopes will become widely adopted globally.

Police already use a version of the definition but it will now be used by councils, universities and other public bodies.

In reference to Labour Party Deputy Leader Tom Watson who recently sang ‘Am Yisrael Hai’ (The People of Israel Live) at a Labour Friends of Israel lunch, the Prime Minister said “no amount of karaoke can make up for turning a blind eye to anti-Semitism”. She added: “No matter what Labour say – or sing – they cannot ignore what has been happening in their party”.

The PM spoke at length about her belief that Israel is a “remarkable country”. Mrs May stated: “We have, in Israel, a thriving democracy, a beacon of tolerance, an engine of enterprise and an example to the rest of the world about how to overcome adversity and defying disadvantages”.

Recalling her visit to Israel in 2014 as Home Secretary, Mrs May said that “seeing isn’t just believing; it is understanding, acknowledging and appreciating”.

The PM noted: “For it is only when you walk through Jerusalem or Tel Aviv that you see a country where people of all religions and sexualities are free and equal in the eyes of the law”.

“It is only when you travel across the country that you realise it is only the size of Wales – and appreciate even more the impact it has on the world”.

“And it is only when you witness Israel’s vulnerability that you see the constant danger Israelis face, as I did during my visit, when the bodies of the murdered teenagers, Naftali Frenkel, Gilad Shaer and Eyal Yifrah, were discovered”.

The Prime Minister praised CFI’s delegations as a “powerful experience” and said she was “so pleased that CFI has already taken 34 of the 74 Conservative MPs elected in 2015 to Israel”.

Prime Minister on Aid to the Palestinian Authority:

Expressing her pride in the UK’s commitment to providing aid to the world’s most needy, Mrs May said that there is a “duty” to “making sure the funds go to the right places”.

Turning to the recent announcement by International Development Secretary Priti Patel that her department was freezing a portion of aid to the PA pending an investigation into allegations that the PA is paying salaries to convicted Palestinian terrorists, Mrs May unequivocally stated: “Let me be clear – no British taxpayers’ money will be used to make payments to terrorists or their families”.

She added: “It is right that Priti Patel has called for an examination of aid spending in the Occupied Palestinian Territories to ensure that every penny is spent in the right places and in the right way”.

Referencing calls from Conservative parliamentarians for DfID to allocate greater funds for peaceful coexistence projects in Israel and the Palestinian Territories, the Prime Minister noted: “And she [Priti Patel] is looking at options for the UK to support co-existence projects in the region – something I know so many people in this room have called for. We are determined to get the right help to those who need it most – and I pay tribute to Priti for leading that work”.

Prime Minister on the Peace Process:

Rejecting Palestinian unilateralism, the Prime Minister said the way to achieve a two-state solution is for “the two sides to sit down together, without preconditions”.

“We should be so proud of the contribution Britain’s Jewish community’s make to our country. From business to the arts, public services to education, that contribution is exemplary”.