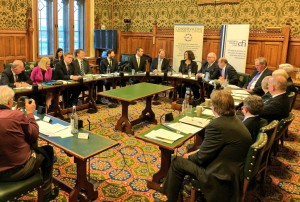 Over 15 senior parliamentarians were joined by diplomats and 50 supporters on Tuesday for the first ever joint event in the House of Commons between CFI and Conservative Friends of Cyprus, to celebrate the UK-Israel-Cyprus trilateral relationship.

The speakers highlighted the strong relationship between Israel, Cyprus, and the UK.

CFI’s Parliamentary Chairman Rt. Hon. Sir Eric Pickles MP opened the event by stating that “Israel and Cyprus have a long tradition of friendship… Both represent a thriving democracy in a very troubled region”.

CFCyprus’s President Rt. Hon. Theresa Villiers MP said that Israel and Cyprus are the “only democracies in the Eastern Mediterranean” and that the two countries had many shared interests, including security and energy. She said: “I am delighted to be a friend of Israel, and a friend of Cyprus”.

Referring to the upcoming centenary of the Balfour Declaration, Middle East Minister Tobias Ellwood MP said: “Britain is very proud of our role, in the part we played, in establishing a Jewish homeland”.

Speaking about the Government’s preparations to mark the Balfour Declaration’s centenary, Mr Ellwood said that “Number 10 is currently making those arrangements and I think that’s very, very important”.

Alluding to the security threats facing Israel, Mr Ellwood added: “We shouldn’t forget what Israel is living and breathing every day”.

Ambassador of Israel, H.E. Mark Regev, said that Israel and Cyprus were “united in wanting to see a more secure, more prosperous eastern Mediterranean”. He spoke in detail about the “very close partnership” Israel had with Cyprus.

Ambassador Regev emphasised: “By working together we can make a better future for Israel, for Cyprus, and for the region as a whole”.

High Commissioner of Cyprus, H.E. Euripides L Evriviades, underlined the friendship between the two countries and the need for regional stability: “Israel and Cyprus need to have predictability, need to control the waves, and need to have that part of the region as predictable as possible”. He added that “it was Ben-Gurion who articulated how important the Eastern Mediterranean is for the security of Israel”.

High Commissioner Evriviades also spoke about the cultural ties between the two nations and drew on his experience as Cyprus’s Ambassador to Israel from 1997 to 2000.

Following the speeches, the keynote speakers took questions from parliamentarians and guests on a number of issues, including on the current Cypriot reunification talks, Britain’s role in the process, and Turkey’s increasing authoritarianism.