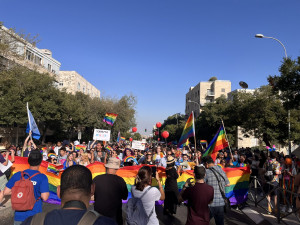 Tel Aviv Pride is the first Pride event of the season in Israel. The festivities began with a message from Tel Aviv Mayor Ron Huldai and Israel’s Social Equality Minister Meirav Cohen who expressed that they “won’t let anyone feel afraid” in Israel.

The Social Equalities Minister underlined that she will “always provide protection” to the community and outlined her plans to open additional LGBTQ+ centres and spaces outside of Tel Aviv.

According to the Tel Aviv municipality, last year’s parade drew a crowd of over 100,000 people, the “largest event of its kind held worldwide” since the start of Covid-19. On Thursday, Public Security Minister Omer Barlev called on “everyone who is interested to come and take part in this special celebration” to do so, stating that “the Pride Parade in Tel Aviv is a holiday for the LGBTQ+ community, which symbolises the uniqueness and openness of the city and brings Israel much respect around the globe”.