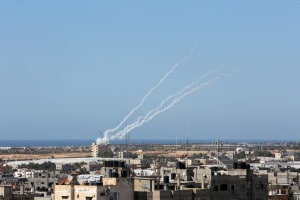 Sporadic clashes have continued in Jerusalem this week as tensions remain high during the Ramadan and Passover festivals, with Gaza-based terror groups launching several rockets at Israel. The violence marks the worst since last year when clashes in Jerusalem precipitated the 11-day military conflict between Israel and Hamas and there are concerns that violence will continue to escalate with Hamas leader Ismail Haniyeh threatening that “we are still at the beginning of the battle”.

Overnight, shrapnel from a rocket launched by Gaza-based terrorists hit a car and a civilian property in the Israeli city of Sderot. Hundreds of ball bearings that were loaded into the rocket were found at the scene. Israel’s Defense Forces responded with a series of airstrikes against a Hamas military outpost, a terror tunnel, underground rocket manufacturing site, and a compound used by Hamas’s air defence force. While no terror group has claimed responsibility for the attack, it is believed that Palestinian Islamic Jihad is behind the launch – the group has been widely linked with recent unrest around the West Bank city of Jenin in which it has a strong presence.

The Temple Mount/Haram al-Sharif compound has been a flashpoint all week with repeat clashes between Palestinian rioters and Israeli police. On Thursday, footage emerged of dozens of masked Palestinian rioters entering the al-Aqsa Mosque – Islam’s third holiest site – and throwing rocks and launching fireworks from within the mosque. Molotov cocktails have also been documented being thrown by rioters from within the mosque this week. On Wednesday, Israeli authorities had prevented Israeli far-right nationalists from marching through the Old City’s Damascus Gate, a popular gathering point for Palestinians in East Jerusalem.

Today’s clashes came as Jews were allowed to visit the Temple Mount for the last time until Ramadan ends on May 2, as part of a years-long policy of barring non-Muslims from the site during the final 10 days of the Muslim holy month. Under existing arrangements, non-Muslims are barred from praying at the Temple Mount and may only visit at certain times.

Throughout the week, Israel’s Prime Minister, Foreign Minister, President and other senior officials have engaged with counterparts across the region in a concerted effort to reduce tensions and restore calm following criticism from several Arab capitals. Inflammatory remarks from Jordan’s Prime Minister celebrating the intense riots on Temple Mount/Haram al-Sharif were condemned by his Israeli counterpart as “unacceptable” and a “reward” for Hamas, and Israeli leaders have reiterated their commitment to maintaining the status quo in Jerusalem.

Israel’s Foreign Minister Yair Lapid spoke with his UAE counterpart Abdullah bin Zayed Al Nahyan during which he reportedly “expressed his appreciation for Israeli efforts to calm the situation and expressed understanding for the on-the-ground difficulties that Israel faces”. Turkish President Recep Tayyip Erdogan called for efforts to “maintain peace and calm in the region” and welcomed Israel’s commitment to maintain the status quo in Jerusalem following a discussion with Israel’s President Isaac Herzog; this has been widely recognised as a much more considered response compared to his usual strong condemnation.