UK to host first ever innovation summit with Israel next month 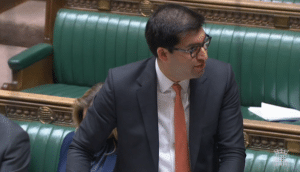 In the House of Commons this week, International Trade Minister Ranil Jayawardena MP confirmed that the UK would be hosting the “first ever joint innovation and investment summit between our two countries” next month.

“This will be a key moment as we deepen our relationship, creating opportunities to increase trade and investment between our nations, create new jobs and boost wages”, the Minister added.

Minister Jayawardena said he was “thrilled” that “our two Prime Ministers have agreed to negotiate an ambitious free trade agreement with exciting new provisions in digital, data, technology, services and innovation”.

He noted that the current agreement “predominantly caters to trading goods”, which is why the UK intends to negotiate a “more ambitious, comprehensive and innovation-friendly trade deal, which will open up opportunities for all British businesses in areas like tech, data and digital”.

The Minister’s remarks came in response to a question during International Trade Oral Questions from CFI Officer Robert Largan MP, who welcomed “the Government’s commitment to negotiating a trade deal with our great friend and ally Israel”.

He urged the Minister to look at including services in the trade agreement, “which make up around 70% of both the UK and Israeli economy”.