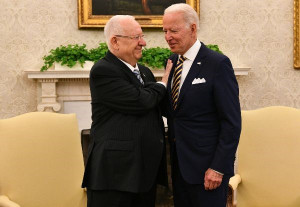 US President Joe Biden welcomed Israeli President Reuven Rivlin to the White House this week – his final international visit as President – where they engaged in talks about the Biden administration’s attempts to re-enter the Iran deal, which has caused increasing concern in Israel.

President Biden assured President Rivlin that “Iran will never get a nuclear weapon on [his] watch”, as President Rivlin emphasised that the threat posed by Iran is “gravest strategic threat faced by the free world”.

During their meeting, Rivlin thanked Biden for his support during the recent Gaza conflict, and America’s commitment to Israel’s security. Rivlin told Biden, “Israel has no greater friend and ally than the United States of America”.

Biden confirmed his “commitment to Israel is iron-clad”. President Rivlin also visited Jewish community leaders on his trip to the US, as well as visiting Capitol Hill where he met Nancy Pelosi, who told him, “Congressional support for Israel has always been bipartisan”, and visiting the UN where he held meetings with General-Secretary Antonio Guterres, and with 20 UN ambassadors.

The trip – his fourth as President – began on 26 June and Rivlin returned on 30 June, where he will shortly hand over the presidency to Isaac Herzog.