Violence intensifies in Israel and the West Bank, rocket fired from Gaza 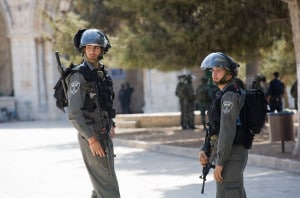 Violence has intensified in Israel and the West Bank over the weekend as clashes and assaults were reported during the rare confluence of Passover, Ramadan and Easter. Inflammatory remarks from Jordan’s Prime Minister celebrating the intense riots on Temple Mount/Haram al Sharif were condemned by his Israeli counterpart as “unacceptable” and a “reward” for Hamas, while a rocket was fired from Gaza for the first time in four months. The United Nations will convene in a closed-doors emergency meeting to discuss the violence that continues to unfold.

On Sunday, ten buses en route to the Western Wall were attacked by Palestinian rock-throwers, leading to several passengers receiving light injuries, including a 13-year-old girl. This came after riots by hundreds of young Palestinians on the Temple Mount/Haram al Sharif compound during the weekend where rocks and iron bars had been stockpiled and makeshift barricades in the Al-Aqsa mosque prepared.

Jordan’s Prime Minister, Bisher al-Khasawneh, made a provocative statement over the weekend regarding the situation to a session of the Jordanian parliament. Whilst referring to Israel as an “occupation government”, he stated: “I salute every Palestinian, and all employees of the Jordanian Islamic Waqf, who proudly stand like minarets, hurling stones in a volley of clay at the Zionist sympathisers”.  Jordan maintains that Israel granted it custodianship over Muslim and Christian sites in Jerusalem, however, Israel rejects this arguing it grants only day to day administration of Temple Mount to the Jordanian Islamic Waqf. An Israeli Foreign Ministry spokesman accused Jordan of “backing those who resort to violence” and adding the actions by Israeli police on the Mount “came only after all other means were exhausted”. The Israeli Prime Minister, Naftali Bennett, said that “there are those who are encouraging rock-throwing and the use of violence against the citizens of the State of Israel”. He added that this would be a “reward” for Hamas, who will see it as a further incentive to increase hostilities and violence in Jerusalem. He called such statements “unacceptable” for Israel and that the country would “not allow” violence to be ignited any further.

On 19th April, the UN Security Council will convene an emergency closed door session to discuss the growing unrest in Jerusalem. Requests for the meeting were made by Ireland, France, Norway, China and the U.A.E. The Israeli and the Palestinian envoys will not be invited to the meeting, with no draft resolution expected to be drafted. The meeting will mostly serve as a means for member states to receive information on the situation from Tor Wennesland, the UN envoy for the Middle East peace process. Wennesland has already urged “both sides to immediately de-escalate the situation”.

The situation has begun to escalate further, after a rocket was fired into Israel for the first time in four months on Monday, being intercepted by the Iron Dome defence system. The Israeli military responded after midnight on Tuesday by bombing a number of targets in the Gaza Strip, including a weapons manufactory controlled by Hamas.

Israel does not believe Hamas fired the rocket but rather a local enclave ruler, however, an army spokesman stated: “The IDF considers Hamas responsible for what unfolds in the Gaza Strip”.